Persons of Color Serving in the Military - 18th Century

Although documents from the early time period are scarce, and many perished in the huge fire at the New York State Archives in 1911, these documents show the military service of persons of color to their communities.

During the Revolution, an owner could send one of his slaves as a substitute for his own military service.    Even though the records are fragmentary, we do have evidence that this was sometimes done by those who served under Hathorn. Records of service during the Revolutionary War for local Blacks or persons of color are also scarce, but we do know the names of three of them:

Records are extremely scarce, but last year we discovered an Orange County man--- Orange County then included the Rockland County area as well--- who had served to defend his community against the French and their Indian allies, who was himself identified as "Indian" in the official record, and one man identified as "free negro." (see linked file following) 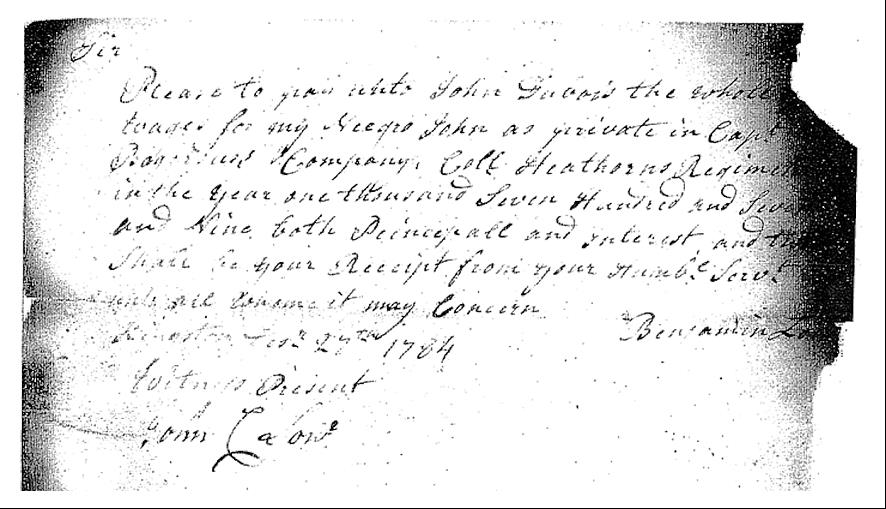 Transcription of this document, which is part of the pay lists for the regiment which barely survived the archive fire.

Please to give unto John Dubois the whole wages for my Neegro John as private in Capt. Bogardus Company, Coll. Heathorn’s Regiment in the year one thousand seven Hundred and seventy and Nine both Principall and interest and this shall be your Receipt from your Humble Sev’t

TOM is named on a handwritten transcription card for a pay certificate for Hathorn's regiment issued in 1785.   Written as "Tom, negro".  His pay was three pounds, nine shillings and 4 pence.

(see full file for the list of all the names on this pay certificate; Tom is the last listed, page 3 of the document linked below).

FREE JACK appears on the compiled service list of those men who were in Hathorn's Regiment that was published in New York in the Revolution as Colony and State, second edition, 1898 on p. 164: 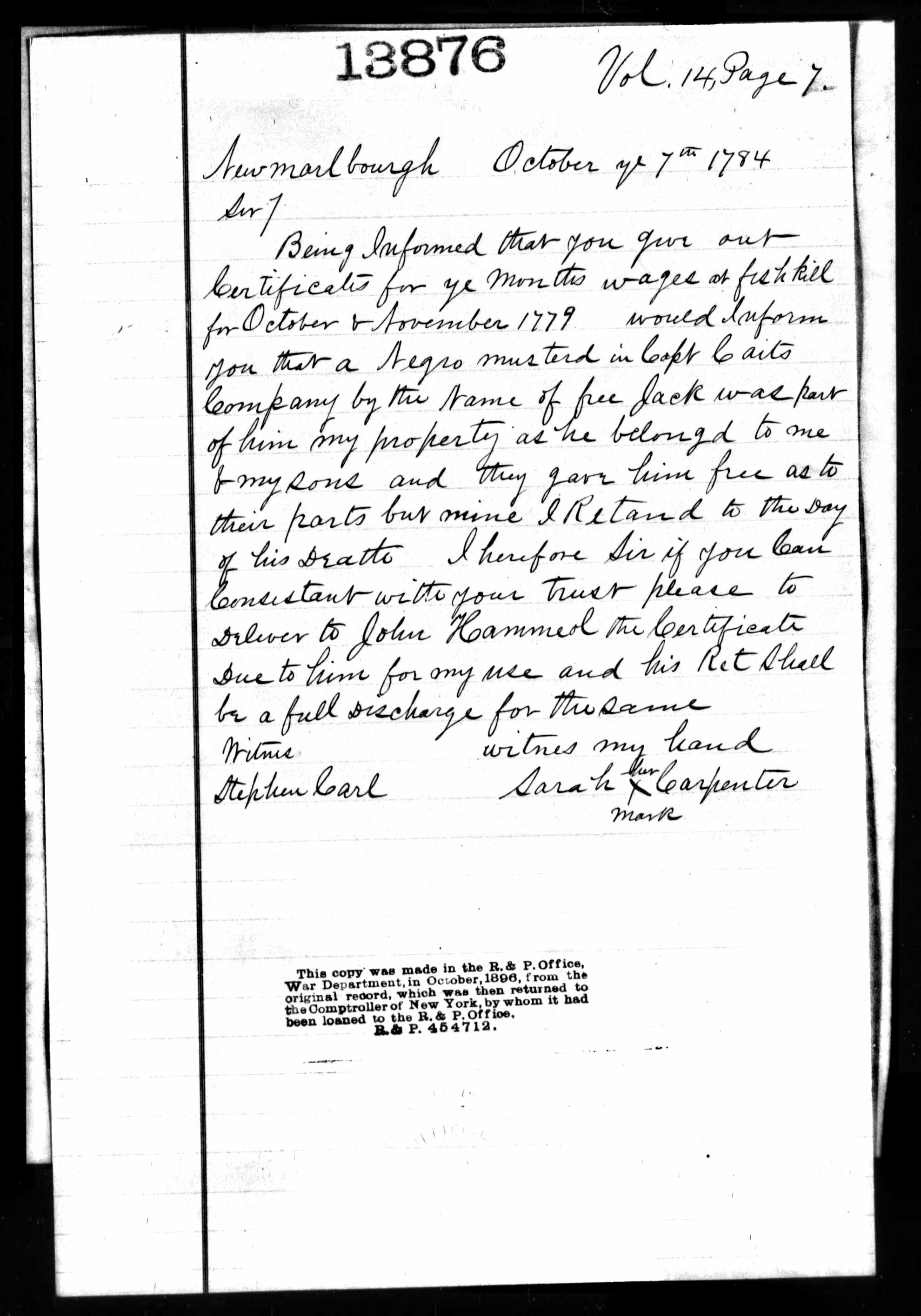 The case of "Free Jack" takes on added interest as researchers work to piece together more documents of Black Americans serving in the Revolution.  In “Forgotten Patriots”: African American and American Indian Patriots in the Revolutionary War” on page 318, it is stated that:

“Free Jack” of Orange County, the slave of Sarah Carpenter and her two sons, served under Captain Cait and Col. John Hathorn.  Mrs. Carpenter’s two sons granted “Free Jack” his freedom.  However, after the war, Sarah Carpenter claimed that she had not freed Jack and requested repayment for her portion of his service in Captain Cait’s Company."

When we investigated the source cited for this, we were able to find the transcription image.  The claim for "her portion" of Jack's service is a shocking reminder that if three people claimed ownership of a slave, the monetary value of the "property" was to be divided the same as if one were talking about a piece of land or furniture.

This document does not prove that this "Sarah Carpenter" is a woman connected with the "Free Jack" of Hathorn's regiment, but it is likely. Sarah Burt, daughter of Daniel Burt married a Joshua Carpenter, but we have found no proof to date that this is the woman in this document. "New Marlborough" was an early name for the Town of Marlborough in Ulster County.  In 1784 when Sarah filed a claim for "her share" of his pay, Free Jack had passed away.

Samuel Peterson served from New Jersey in the Continental Army during the Revolutionary War, pension claim W26880.  He and his wife Abigail were enumerated in the first U. S. census, 1790, living the the Town of Warwick.  They were married at Sterling Iron Works in 1787. (Source: Genealogical History of Black Families of Orange County, Vol. 3, p. 219.)  He died in 1822 and is buried in New Jersey, according to family history research (see linked file below).

Persons of Color Serving in the Military - 19th Century

Persons of color of our area serving the military during the next century are somewhat better documented.   These are a few of the records found so far; a great deal more remain to be discovered.

Here is a sampleservice record, showing tThomas Gaul, who died from Typhoid, and his brother James Nelson Gaul: 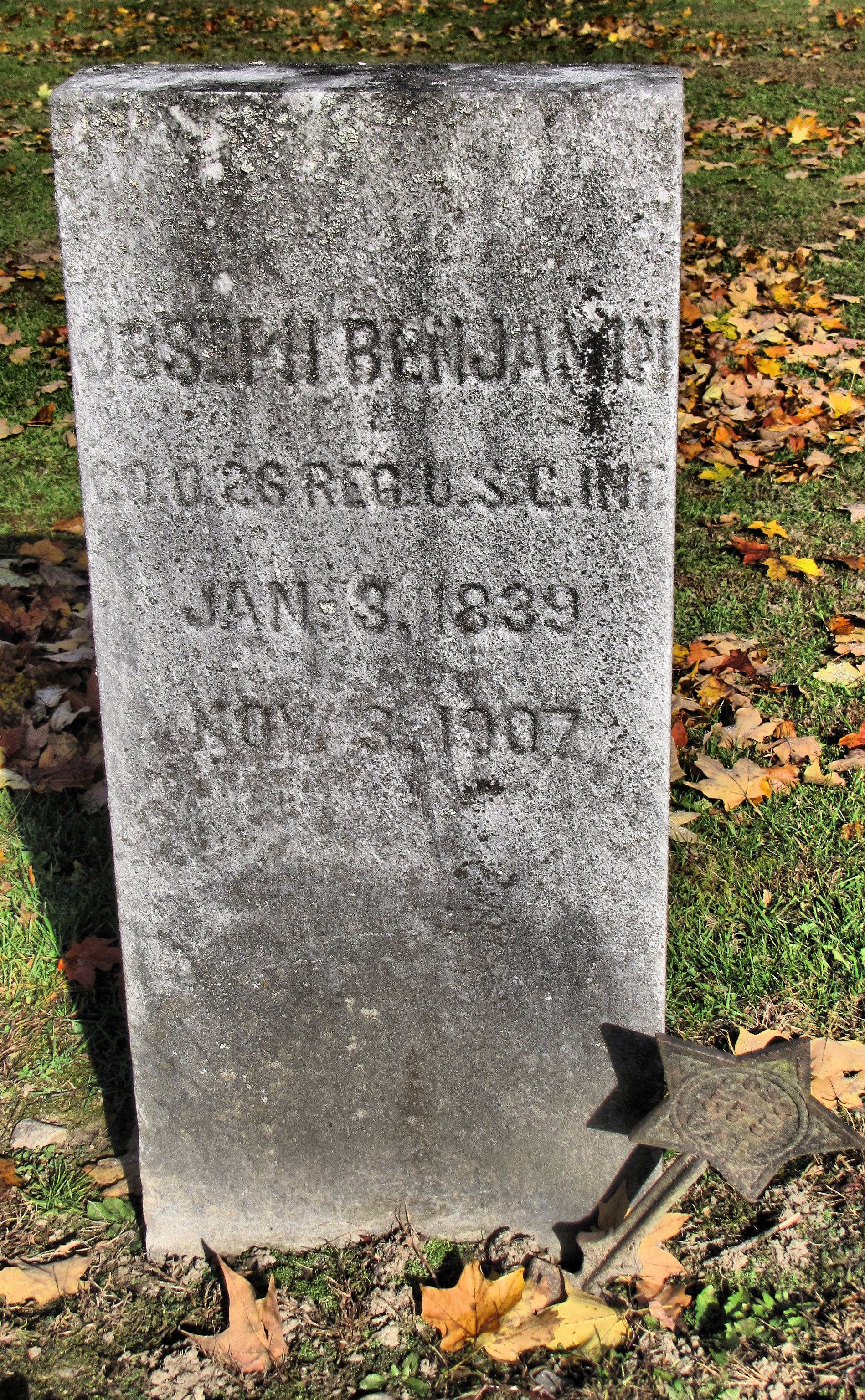 Many people do not realize that in Warwick Cemetery, there is a section dedicated to the graves of persons of color who were veterans of the Civil War. The initials "U.S.C.T." on the gravestones indicates "U. S. Colored Troops."  Photo shows the stone for Joseph Benjamin.

Some of the names who served:

Source for the names below:  Ruttenger's History of Orange County, page. 600-602.

Persons of Color Serving in the Military - 20th Century

The number of persons of color serving in America's wars and other military service is not yet known.  Certainly there were many who served in World War I, World War II, Korea, and Vietnam.

Discovering them and celebrating their legacy of patriotism is an ongoing project.

From a review of obituaries of Warwick veterans who were members of the local UAME churches, (Union African Methodist Episcopal Church),  here are a few of their names:

The following is a tribute to the Stewart family from the book Remembrance by artist Robert Fletcher. (Used with artist's permission.)