Slavery in our region did not originate with the European colonizers; Native American tribes who were in conflict would sometimes take captives from their enemies and keep them in enslavement as servants.

With the Dutch settlement of the Hudson Valley came the first waves of enslaved Africans. Sometimes, they would also enslave Native Americans, but in our area this appears to have been unusual.  The numbers of African enslaved persons in our area was always small; economic factors related to climate and agricultural practice were largely responsible for the fact that in Warwick, only the more well to do families owned a few slaves.

A greater percentage of the non-free workers here would have been indentured servants of European ethnicity who owed years of service in payment for their passage to America, in a bid for freedom from poverty and oppression in their homelands. Sometimes they were sent here as indentured for many years, for punishment for their crimes. Their story is a different one from the Africans who were captured and brutally transported to our area, or born into slavery of those who had been kidnapped in a prior generation.

The newly formed State of New York in April of 1777 included a provision in the draft of the state Constitution a statement affirming the right to freedom for slaves, but it was cut out the next day.

CENSUS OF 1790 - PERSONS OF COLOR IN WARWICK

This extraction shows that although the percentage of persons of color was small, there were significant numbers living in the community; In 1790,, fifty three were free, ninety four were slaves.  There were only nine "independent" households (i.e. head of household was person of color); the rest -- both free and enslaved--lived in homes with a white head of household.  It should be noted that the Town of Warwick at this time included what today is parts of Chester.

The first enslaved Africans who arrived in our area would have been brought by the Dutch in the early to mid 1600s.  When New Amsterdam was surrendered to the English in 1664, our area became the New York colony.

African tribes had long practiced enslavement of captured enemies, but the trans-Atlantic European trade vastly expanded the "market" for slaves causing explosive growth of enslavement as an economic pursuit on the African continent.  Inadequate supply of laborers for new agricultural enterprises of the European colonial world created a nearly insatiable demand for a constantly replenished supply of slaves.

Although never a major economic factor in our area, the acceptance of slave ownership continued as a social norm, particularly for the "lowest" tasks. Few questioned its legitimacy, for the colonial world view was still one of "hierarchy"; there were certain roles that were proper to certain social strata, as ordained by the civil and religious institutions of the time.

In their view social stratification was part of how the world was created. Keeping the social order was important to stability, and part of the divine plan.  This applied to other areas of life as well.  Not that  long ago in American society, and in some world cultures still today, severe beating of a wife or children who had disobeyed was "perfectly within a man's right,"  because they were your property.

While today we are horrified at the reality of slavery, it simply did not occur to most people of the 17th and 18th century that claiming ownership of another human being and forcing their labor was morally wrong.

Free Blacks in the 18th Century

While we have very little information about the numbers and lives of free Africans here in the mid-Hudson during the 1700's, they did exist.  During the Revolutionary War "free Jack" served in Hathorn's militia (see "Military Service" section)  and other free Black persons -- most were likely former slaves that had managed to purchase their freedom or were freed upon the death of their owner-- were in the area. 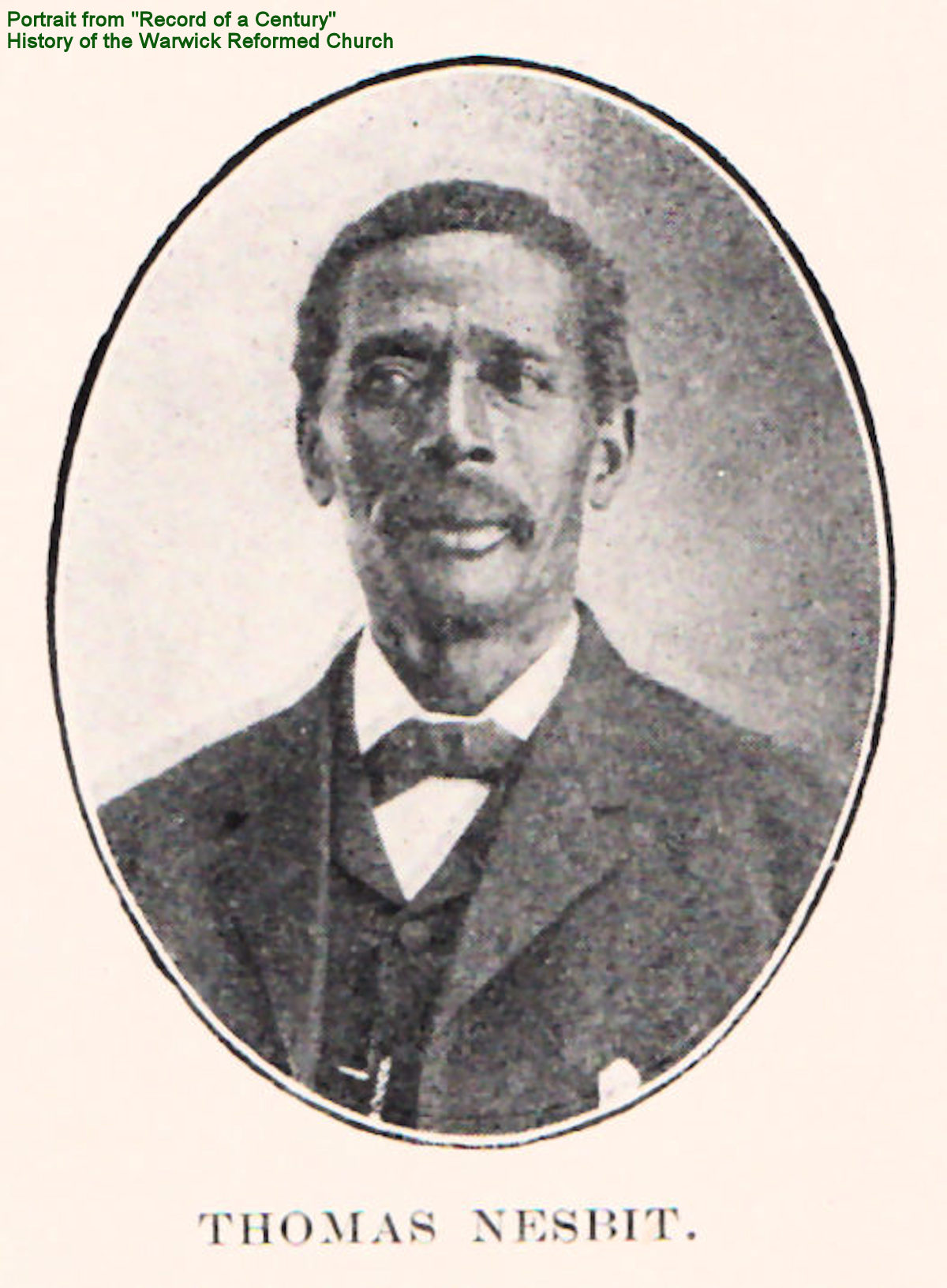 Sometimes the only record we have of a person who was born enslaved, then freed,  is an obituary or other notice from local newspapers mentioning this fact. So far we have discovered these individuals by this means:

Thomas Nesbitt was the sexton (caretaker) of the Warwick Reformed Church. He was born to slavery in Columbia, SC in 1853, coming north with Peter Monell in 1866.

Edmund Gillette was born an Orange County slave slave and spent his early life with the Gillette Family at Otisville, then with Squire James Burt here in Warwick, until in later life boarding with local families.

Ruth Garrison was born a slave in Warwick "on the Ridge on the Remesen place."  We do not know her maiden name, if she had one.  She married Frank Garrison, and also worked at the DeKay homestead in Vernon.  "Aunt Fanny", her sister, had been born enslaved in Warwick "nearly a century ago" (circa 1813).