THE HISTORY OF THE JOHN HATHORN HOUSE: INTRODUCTION

The house was built in 1773 by John and Elizabeth Hathorn.

It is constructed of locally quarried stone and has a wooden extension on the north and west sides.

The house has been in the hands of three main families since its construction: the Hathorns, the Sanfords, and the Raynors.

Hathorn Road is the last segment in the Town of Warwick of the old "Kings Highway" which has not been straightened and widened. The northern section has only pre-Revolutionary houses-- The Adonijah Morehouse home and the Hathorn House-- and looks about the same as it did during colonial days, other than the blacktop and phone poles.  There was also a pre-revolutionary house on the southern segment, the Belden Burt home.  Belden Burt married Sarah, the daughter of John and Elizabeth Hathorn. That early Burt house it is said, was not destroyed but is now contained within the structure of the Chateau Hathorn.

This drawing of the house was done when owned by the Pierson Ezra Sanford family.  Click here for a view showing the outbuildings. 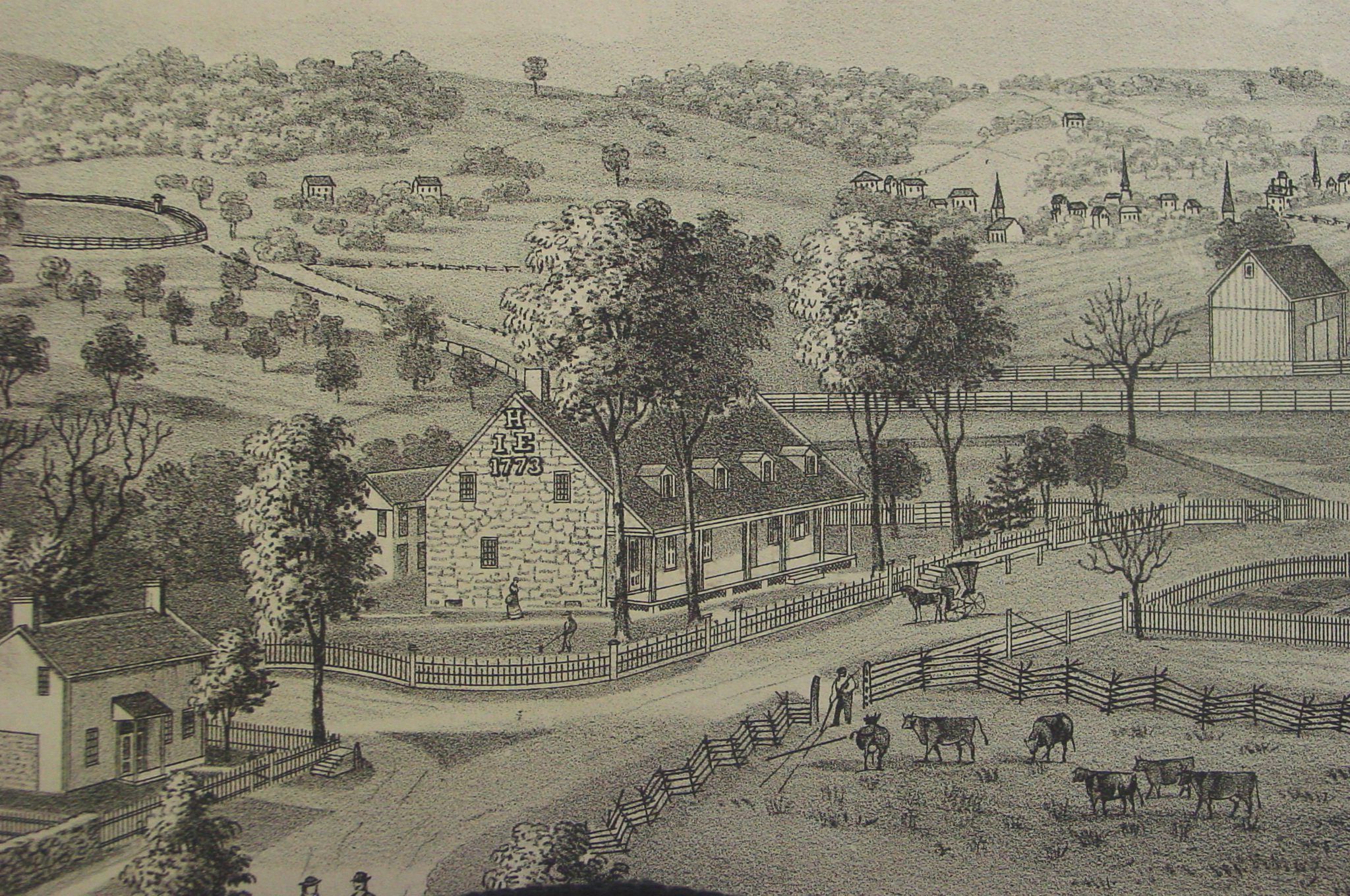 Description of the Hathorn House in early days recorded in by Ferdinand Sanford in his paper on John Hathorn (Historical Papers No. XI, Historical Society of Newburgh Bay and the Highlands, 1904):

“This house was built of limestone, with gambrel roof, (transcriber’s note—possible typo when published, as the house today has a gable roof, and there doesn’t seem to be evidence of the roof shape being altered when looking at the gable ends) covered with hand-made split shingles—a story and a half in height and about 30 x 38 feet, with a kitchen on the east end one story in height.  In the south gable of this house near the peak are inlaid in red brick the letters:

Standing for “John and Elizabeth Hathorn 1773”.  It is said that these bricks were imported from Holland.  All the nails were wrought iron hammered out by the blacksmith.  The flooring in the old house was split and hewed planks of oak timber; some of the floor boards were 30 inches wide, and were worn in grooves between paths, which is extraordinary in a private house.  These same floors were used for 105 years.  The timbers used in construction were immense in size.  All hardware, locks, hinges and casings were hand made, and the hinges were blocked in place by leather under them.  The roof had four dormer windows in front and sloped down from the house proper to cover the porch.  The interior of the house contained on big room in front, two bed-rooms in the rear and hall in the south end, on the first floor, and four rooms on the second floor, with a nice old stairway.  There were four fire-places—three down stairs and one in the second story.  The chimneys were also built of stone extending up from the cellar.  One of them was 6 feet deep and 16 feet long.  The front door was an old fashioned Dutch door, divided in the middle.  There was also a store house, built of wood, on the south end of the main house, size 30 x 40 feet, two stories.  There was also an old barn on the north side of the door yard.”

Below, prior to construction of stone wall. 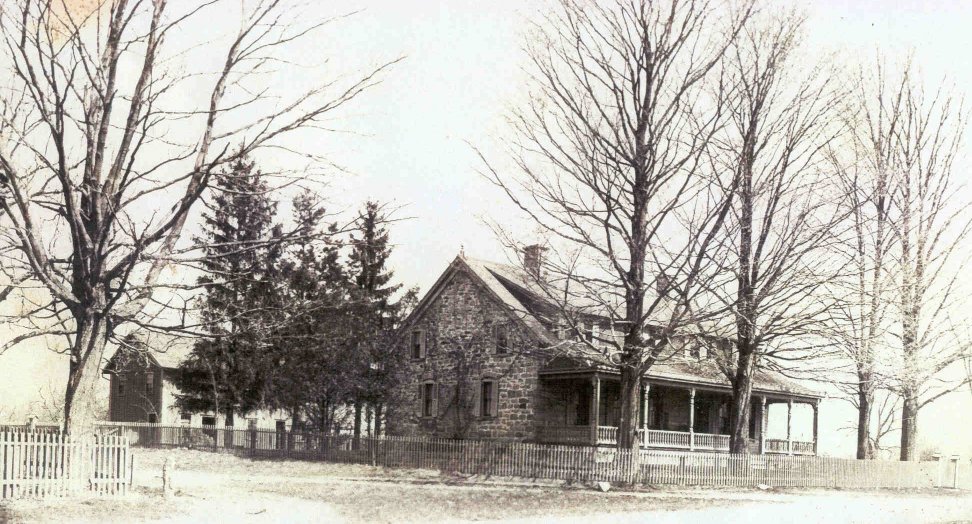 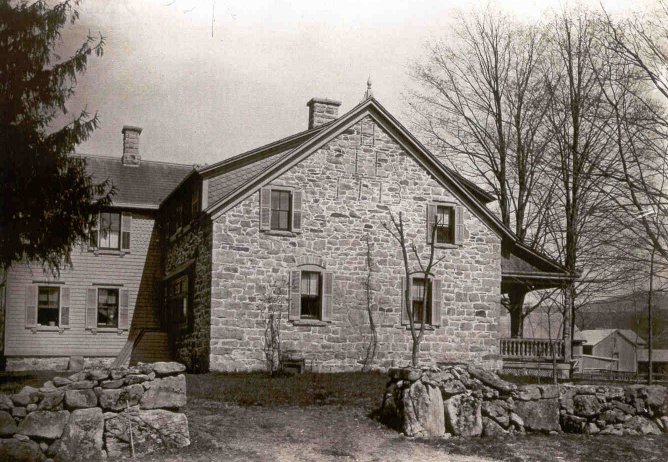 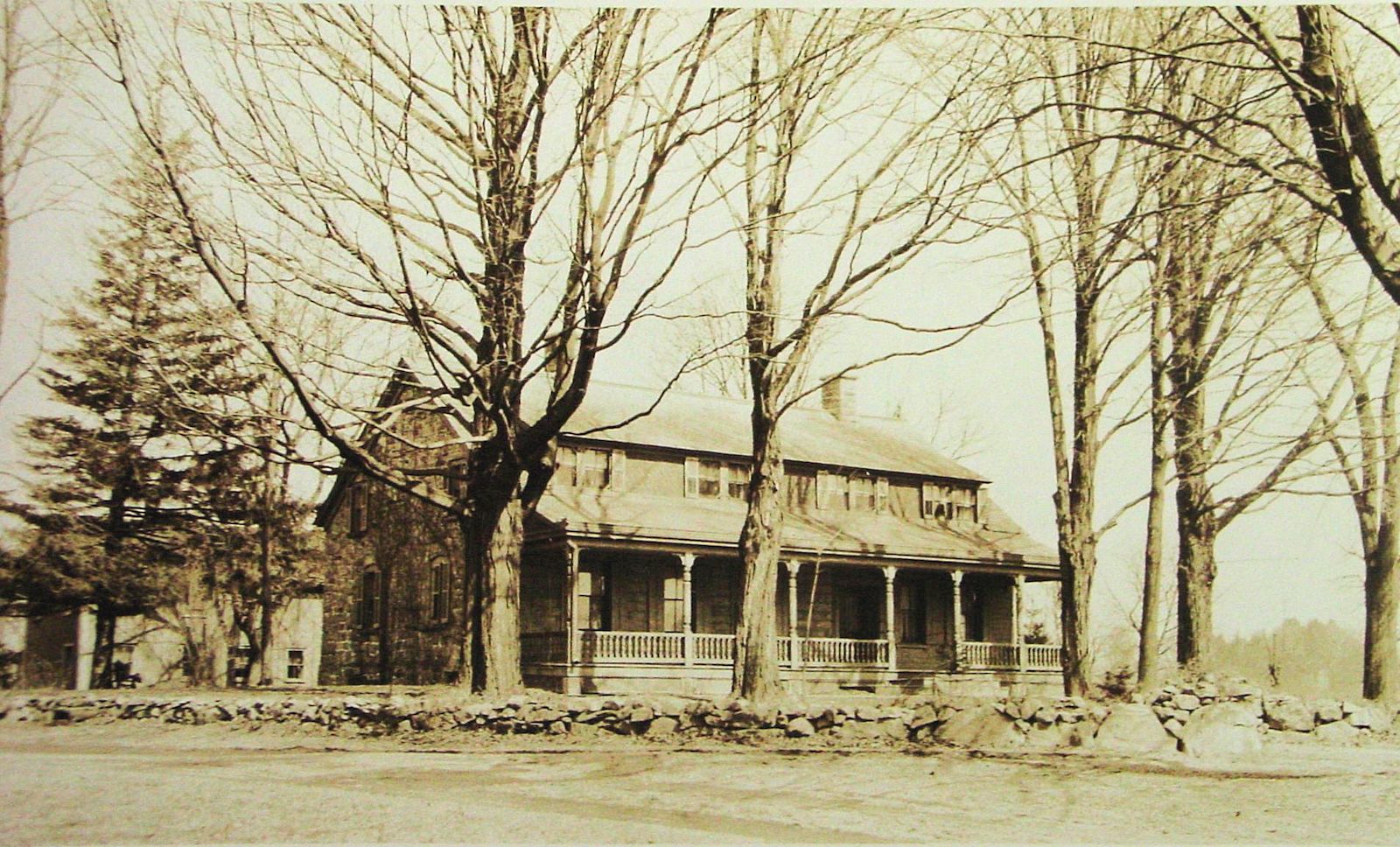 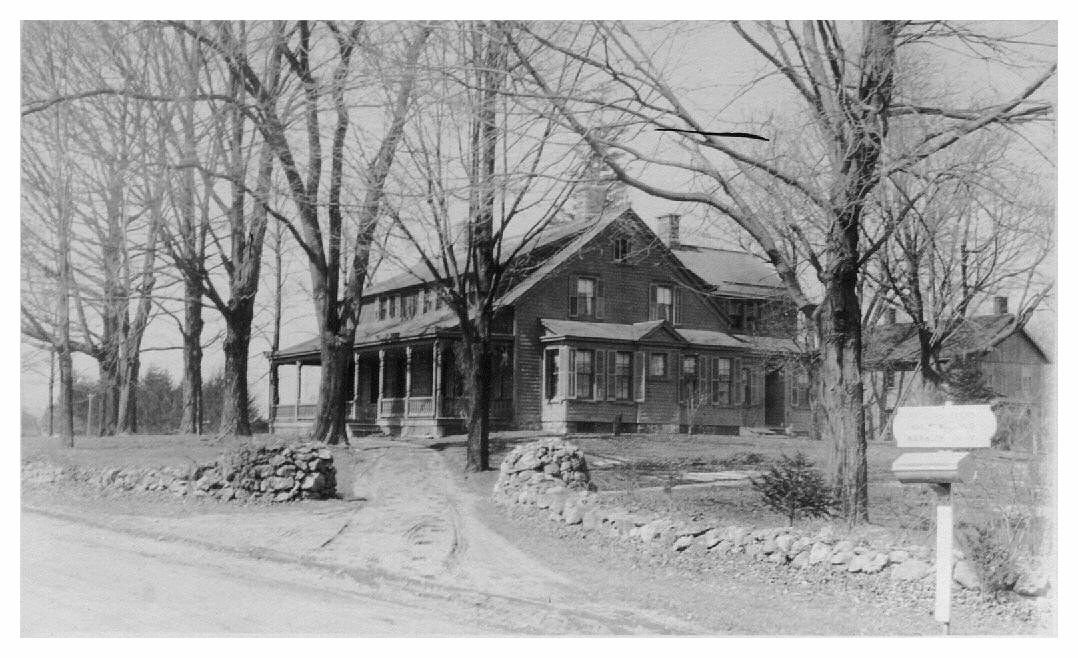 The house was listed on the New York State and National Registers of Historic Places in March of 2001.

From the diaries of Rev. Manasseh Cutler

"...we were told there was a tavern one mile further on (from Smith's/Baird's)...the house was not at this time a tavern but they entertained us very well, and good feed for our horses.  It is kept by Collonel Thos. Hathorn (a confusion-- Thomas, the eldest son of Hathorn, was only 14 at this date)..."