THE HISTORY OF THE JOHN HATHORN HOUSE: Other Household Members

John Hathorn Lott was born in the house in 1793.  His father Bartholomew Lott is recorded as having served in Washington's Life Guard.  IBoth Bartholomew and John Hathorn Lott  lived to be a centenarians.  Bartholomew Lott's father in law was William Fitzgerald, who was involved in the Sterling Iron Works with the Townsends.  He was captain of the Sterling Company of Hathorn's Regiment, 1776 and it is said that he was a survivor of the Battle of Minisink His farm was at the border of Warwick and Monroe in Dutch Hollow (Fitzgerald Falls, on the Appalachian Trail, named for the famiily).

There lives on the shores of Glenmere Lake, one of the picturesque pleasure resorts of the Warwick Valley region, in this county, a remarkable old man. His name Is John Hathorn Lott, and he is now in the ninety-seventh year of his age, having been born near his present abode on Sept. 11, 1793. His father, Bartholomew Lott, was a soldier of the Revolutionary War, and served for three years as a member of Gen. Washington's body guard. He (the father) married and buried five wives, and lived to the age of 106 years. John Hathorn Lott was named after Gen. John Hathorn of Warwick, who commanded the American troops In the disastrous battle of Minnisink. As a youth Lott learned the cooper's trade, once a flourishing industry in the way of making milk pails and butter tubs for Orange County dairymen, and barrels for Orange County applejack distilleries. He has followed this occupation chiefly through his long life, and at this day the visitors at Glenmere Lake can often find the stout and hale nonagenarian hammering away at his trade in the little old cooper's shop on the shores of the lake. He boasts that he can even now turn out a well made butter tub from the lumber in the rough, and, by hand labor in a single day's work. He is, in fact, a marvel of mental and physical vigor in extreme old age. His step is springy, and he thinks nothing of walking off twelve to fifteen miles. His eyesight and hearing are well preserved, as are his memory and other mental faculties. He has been twice married, and nineteen children have been born to him of whom twelve are living. The eldest survivor, a daughter, is in her seventieth year. He has never used tobacco in any form, but has not denied himself, when inclination prompted, a moderate draught of pure Orange County applejack, mellowed in a barrel of his own make. He has voted the Democratic ticket at every general election, including that of last Tuesday, for sixty-one years.
Death notice for John Hathorn Lott, The Sun (NY) Aug. 23, 1894 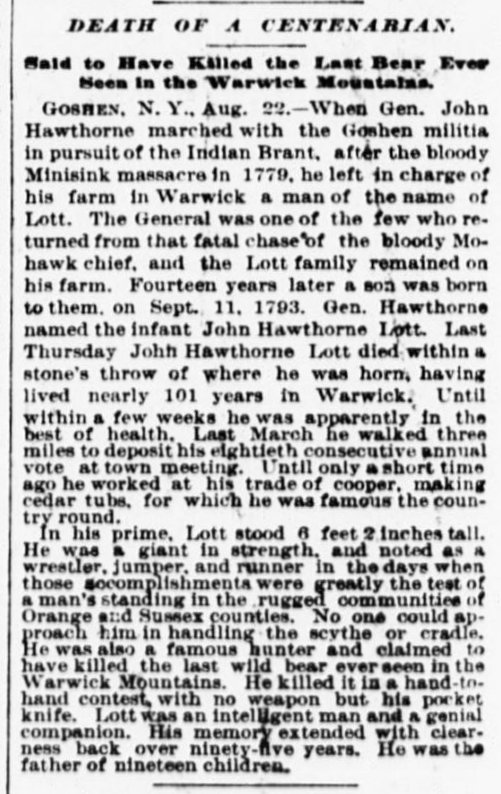