THE HISTORY OF THE JOHN HATHORN HOUSE: SANFORD FAMILY

OVERVIEW OF SANFORDS OF HATHORN HOUSE 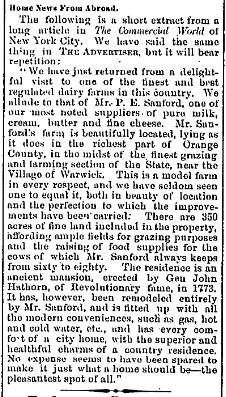 Ezra Sanford, Jr. and his daughters 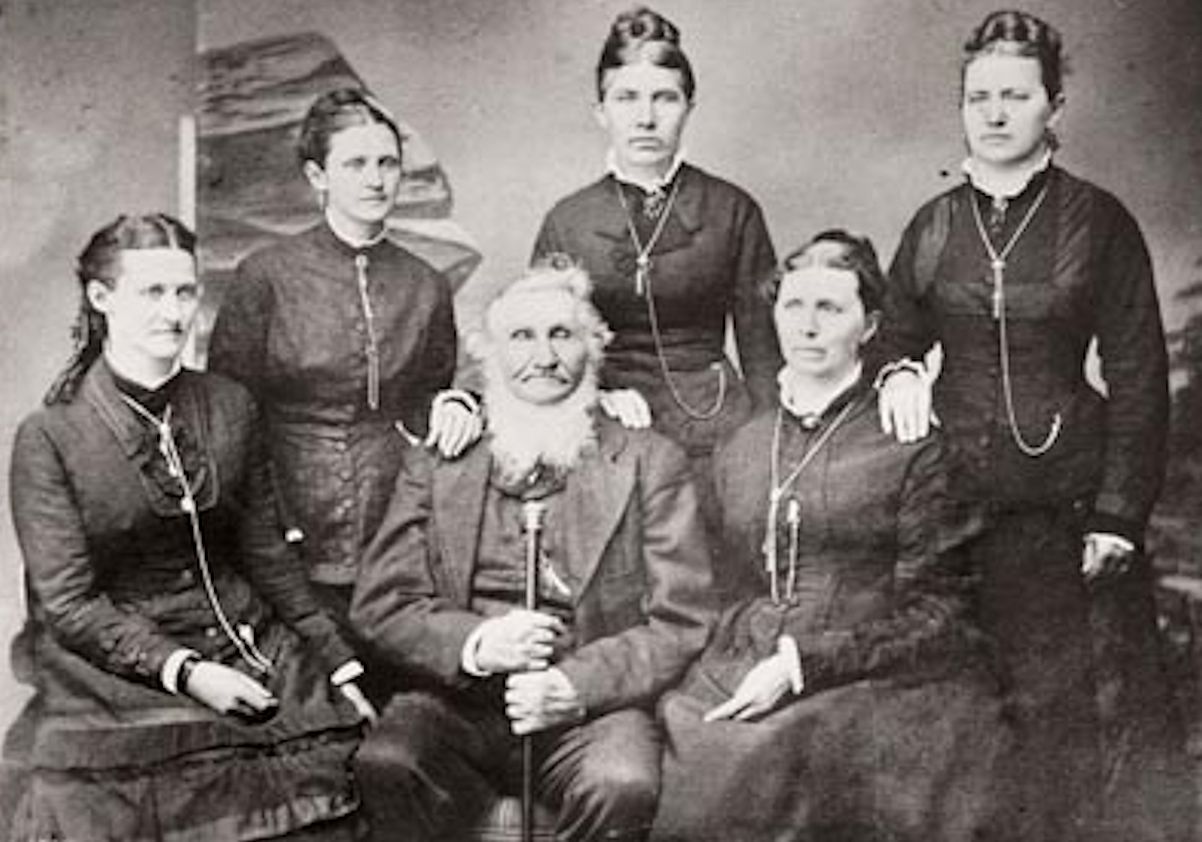 Seated left to right – Abigail Sanford Gabriel, Ezra Sanford, Hester Ann Sanford Price, and standing: Emma Sanford Tuttle, Julia Sanford Morehouse, Elizabeth (Libby) Sanford. Each of the girls had been given a gold watch and chain by their father. The picture was known as the “chain gang” photo (identifications courtesy of Jean Beattie May).

Postcard of the house when owned by Pierson Ezra Sanford, son of Ezra Sanford, Jr.  This photo taken after four separate dormers were merged into one, apparently part of the renovations planned by E. G. W. Dietrich in 1889. 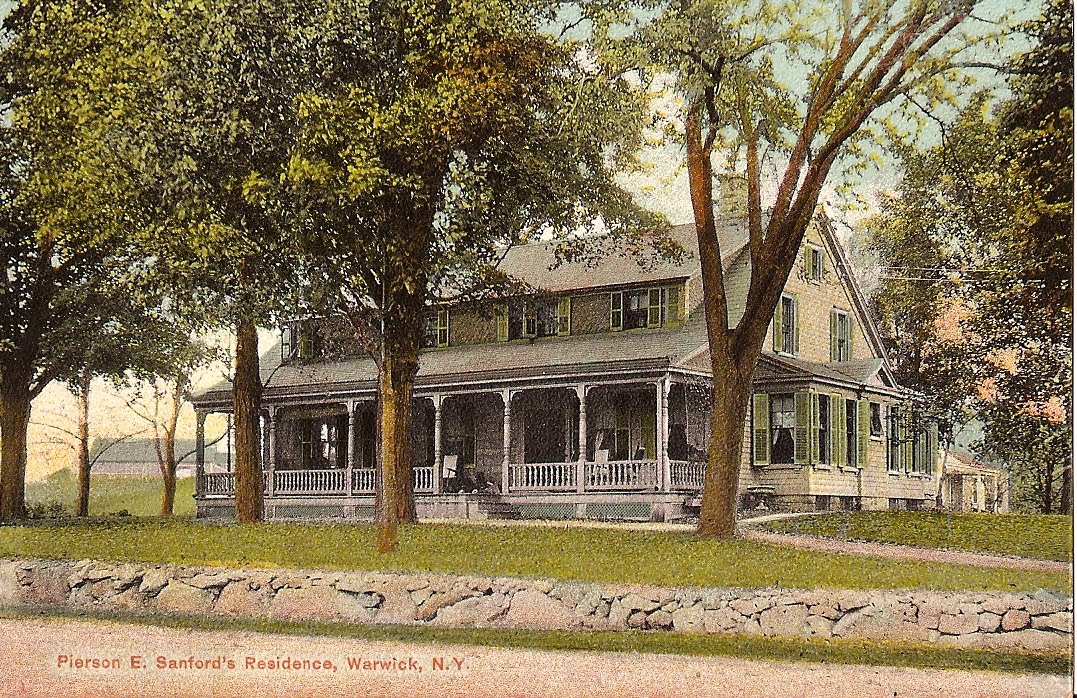 Pierson E. Sanford was born August 26, 1832. He attended the district schools of his boyhood days, Mr. Sanford married, in 1855, Miss Annie S. Burt, a daughter of Mr. and Mrs. Stephen A. Burt. In 1856 he left the parental roof and engaged in farming for himself. The dairy business early enlisted his activities, and in 1864 he established quarters in New York City for the buying and sale of milk, cream, butter and cheese. He commuted daily to New York City on the 7 AM train for many years, and  donated the village clock  for which the Clocktower building is named, in 1907. He died in 1916. (Source: Obituaries of Ezra Sanford, Jr. and P. E. Sanford, and Warwick Valley Dispath 1950/02/01) 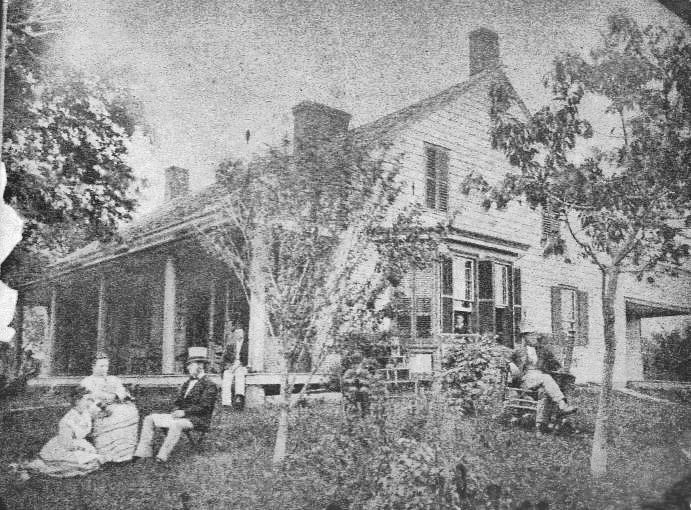 A house with members of the Sanford family-- it does not appear to be the Hathorn House, as the chimney configuration doesn't seem to match.  However, it is possible the Sanfords made major changes.  This photo dated to the early 1860s by costume historian Mimi Sherman.

Edward Burt Sanford was the next Sanford to own the Hathorn farm.  It was willed to him by his father Pierson E. Sanford. 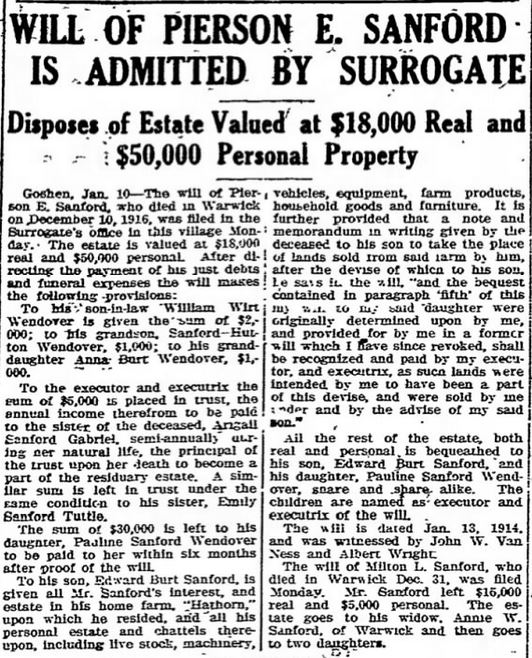 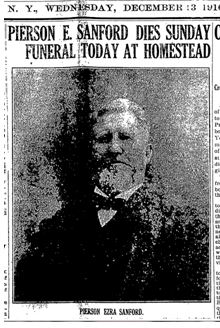 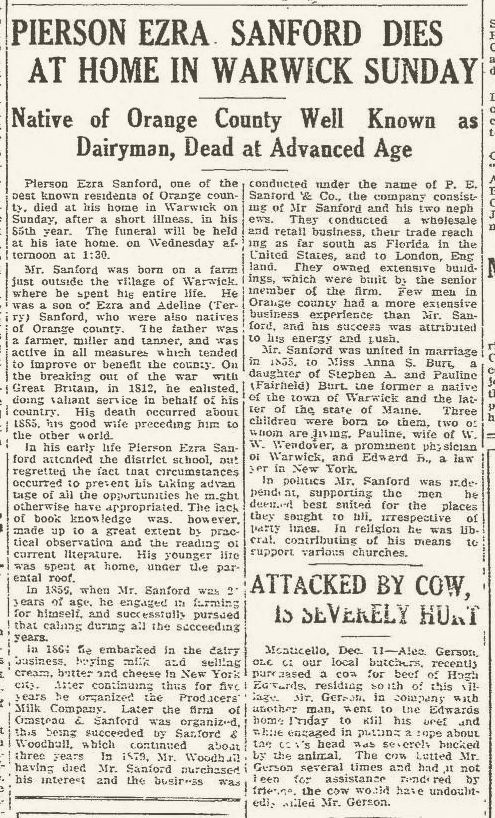 "Edward B. Sanford died at his apartment at 40 N. Main Street, Atlantic City, shortly after midnight on Monday night of this week, after an illness of three days from a heart affection.  Mr. Sanford was a son of the late Pierson E. Sanford and Ann Burt, and was born in the homestead south of this village on March 12, 1865.  He attended the Warwick Institute, and then went to Cornell University.  He studied law and for some years practiced in New York City, but retired a number of years ago because of ill health.  For some years past he has had his home in Atlantic City, and also spent a part of the winter in Florida.  Mr. Sanford never married, and the nearest surviving relatives are the children of his sister Pauline, who was the wife of Dr. W. W. Wendover; S. Hutton Wendover of Meriden, Conn., and Mrs. Howard Conklin of White Plains, N.Y.  The body has been brought to this village, and funeral services will be held in the Cemetery Chapel this afternoon at two o'clock, with Rev. Dr. Applegate officiating.  Burial will be in the family plot in Warwick Cemetery."