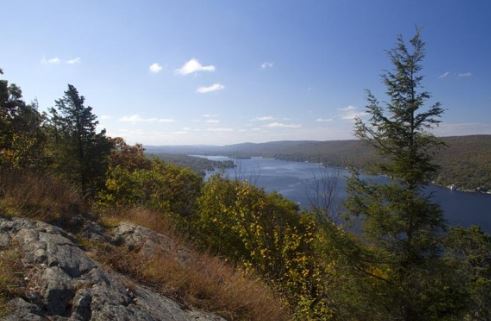 ​After an epic struggle of more than a decade, Sterling Forest State Park was created in February of 1998 when Gov. George Pataki of New York and Gov. Christine Todd Whitman of New York signed a deal for 15,800 acres of the rugged mountain woodland.  Straddling the state line, the preserve has grown to include nearly 22,000 acres of environmentally sensitive lands since that date, ensuring that the giant "green lungs" and watershed straddling the northern NY/NJ border are intact for future generations.

Activists began their efforts in 1985 when it was first learned that the privately owned land was going to be slated for development. Paul and JoAnn Dolan and other environmental leaders assembled a coalition of stakeholders to work on different aspects of this uphill battle.

In the following decade, with preservationists chipping persistently away at the project, new urgency arose when the Sterling Forest Corporation proposed major development in a number of different iterations.  A vigorous program of outreach and creative tactics on the part of both development advocates and preservations ramped up. and after many dramatic developments, the Park was finally secured in 1998.

The original boundaries were gradually expanded and most of the remaining Sterling Forest land was brought into the park,.which is operated by the Palisades Interstate Parks Commission.

The Town of Warwick includes about 1,700 acres of Sterling Forest State Park, lands to the east of Greenwood Lake.  The Lautenberg Visitor Center and the lands around it are within the Town.

TIMELINE AND DOCUMENTS: AN EFFORT OF DECADES

Chronology of events extracted from

Saving Sterling Forest by Ann Botshon and Palisades: 100,000 Acres in 100 Years  by Robert Binnewiess, and other sources

In 2020, Paul and Joann Dolan donated copies video footage, documentaries, and documents to the Albert Wisner Public Library's local history room so that the history of the movement to save Sterling Forest would be accessible to future generations. The DVDs are available for in-house viewing only.