THE BATTLE OF MINISINK

THE BATTLE REPORT BY HATHORN

This official report by Col. Hathorn gives an eyewitness account of the disastrous battle by its commander. The document is owned by the Wisconsin Historical Society as part of the Draper Manuscript Collection.
For a transcript of the handwritten report, click here.

[All rights to these images of the report are held by the Wisconsin Historical Society, and may not be re-published in electronic or hardcopy form without their consent].

Although a few attempts were made to recover the remains, the dangers presented proved this impossible.  Finally, in 1821, a committee was formed to raise funds to erect a monument, and the battlefield was visited again and what remains could be found were interred in Goshen. 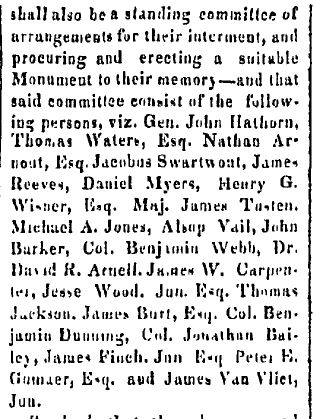 Description of the Minisink Battle Interment Ceremony from The Evening Post, July 30, 1822

On Monday morning, the 22nd, the people began to assemble in crowds, at an early house, to witness the public solemnities which were announced to take place on that day.  At ten o'clock the preparations commenced.  The Cavalry, the Infantry, the Cadets, the Mourners, the clergy, Survivors of the Minisink Battle, Officers and Soldiers of the Revolution, Military Officers in Uniform, Civil & Judicial Officers, Gentlemen of the Bar, Medical Society, Masonic Brethren, etc., etc., etc. all collected and moving from different points, at the same time, to join the Procession, formed a most sublime, interesting and solemn scene.  Under the judicious management of Major worth, as Marshal of the Day, and his Aids, all confusion and disorder was prevented, and every branch of the procession, took its appointed station in the line, without the least interruption.

The Procession was formed immediately after 12 o'clock.  The Bones of the brave men, who fell a prey to the merciless savages & painted tories, at the Battle of Minisink, having been deposited in two plain mahogany coffins, at the house of James W. Carpenter, wre brought out, shrouded in black, surrounded by sixteen grey headed officers and soldiers of the revolution, as pall-bearers, and placed each upon a separate hearse, drawn by two white horses.  Thirteen of the sons of those who fell on that disastrous day, namely-- Major Tusten, Capt. Barker, H. G. Wisner, Esq., Moses Thomas, Esq., Michael A Jones, Jonathan Bennet, Samuel Bennet, John Little, Alsop Vail, Samuel Vail, Jared Mosher, Wm. Barker, and John Knap, followed as chief mourners, and besides them there were a long train of more remote connections.  The procession was formed in the same order heretofore published, and it is therefore unnecessary to repeat it.

All things being ready, the mournful music struck up, and the line moved off with a slow and solemn step.  Both sides of the street were lined with spectators, from one end to the other, nearly a mile--every house was full, and every stoop was crowded.  The whole procession, which was something like a half a mile in length, moved with great regularity and precision, and minute guns were fired and the bell tolled during the march.

When the procession arrived at the place of interment, the battalion of Cadets first encircled the vault, which had been hewn out of a rock on the south side of the church-- next to them were drawn up in succession, the different societies and the military; and then the citizens, who had only been spectators.  A stage was erected near the vault, where the solemn services were performed.  Here, we beheld and interesting spectacle-- Gen. Hathorn, who commanded hat unfortunate expedition, as a Colonel, forty-three years before, now verging upon eighty-- on his left, Maj. Poppino, who was an officer under him in the same battle, now ninety six years of age, and Thomas Waters, about sixty, also in the same battle.  Although 96 years of age, Major Poppino walked with the procession, and was one of the pallbearers.

As soon as the procession was formed around the vault, the solemnities were opened with prayer, by the Rev. Mr. Fisk.  The Rev. Mr. Wilson, then delivered an Address upon the occasion.  He first took a view of the scriptural authority applicable to the case -- spoke of the removal of the bones of Jacob, of Joseph, and of others, recorded in scripture - he gave a history of the battle of Minisink, and the circumstances attending it--and concluded by calling the attention of the multitude to the resurrection of the dead, and the day of judgment.  We understand it is the intention of the Committee of Arrangements, to solicit a copy of Mr. Wilson's address, for publication-- After Mr. Wilson concluded, the coffins were let down into the vault.  Mr. Wilson then took Gen. Hathorn by the hand-- introduced him to the multitude, and read a sort address, which the General had prepared, on occasion of his being appointed to lay the corner stone of the Monument, but which, in consequence of his age and infirmities, he found himself unable to deliver sufficiently loud to be heard, Gen. Hathorn and Mr. Waters went down into the vault and laid the corner stone.  Prayer was again offered up, by the Rev. Mr. Cotter.  Three vollies of musketry were fired over the vault, by the Cadets, which closed the ceremonies.

The number of persons assembled on this interesting occasion, has been variously estimated--but the best founded calculations we have heard, makes out 2,000carriages of all descriptions averaging five persons each--and this is perhaps not too high, for most of them were two horse waggons, crowded full, some with eight or ten in -- besides these, there were great numbers on horseback and on foot, so that the whole number could not have fallen much short of twelve thousand.

As soon as the funeral was over the people began to disperse--no accident happened-- and the whole day was spent in a manner becoming the occasion.

Alto' some may be disposed to make light of this business, and call it a mere catch-penny trick for the benefit of tavern keepers; yet not so with the patriot and the philanthropist--many a manly tear was shed on this occasion--we saw the big drop roll down the furrowed cheek of the grey-headed patriot, at the recollection of the past and the present; and there were few that attended the solemnities, whose hears were not solemnized.

We have here given a simple statement of facts--we attempt not to embellish--it is not an occasion which requires it.  We have done our duty--the memory of the brave and the unfortunate have been honored.  Better late than never.

The Cadets remained at their encampment until Thursday morning, when they took up their march for Montgomery, thence to Newburgh, and on to West Point.  They conducted themselves with decency and propriety which here, and the people were much pleased with their uniform appearance, their military discipline, and their band of music.  It was stated that they had lost a considerable quantity of clothing, but most of this was afterwards found and sent on to them.