For longer walks consider these:

Clausland Mountain Park: Clausland Mountain Park’s 532 acres of heavily wooded mountain terrain composed primarily of hardwood trees including red and white oaks, maple, hickory and beach trees and groves of hemlocks. There are also dogwoods that flower in the Spring along with mountain laurel.  The land is in its natural state with many fine scenic overlooks.  While the area does not contain any permanent bodies of water, during periods of heavy rain many streams cascade down the mountain.  The major trail through the park is the Long Path and can be identified by a blue blaze.  It runs in a north - south direction beginning at the former Nike site off Highland Avenue and exits at Tackamack Town Park. 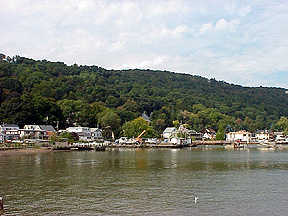 History:  Clausland is named after the “Clever Indian”, Jans Claus, whose Indian name was Tackamack.  He acted as an agent for the sale of land to Dutch settlers.  Clausland Mountain Park was purchased in 1969. It was funded by local donations, County funds and a Federal grant.  Three adjoining tax delinquent parcels were acquired in 1981. In 2000, two more parcels consisting of 50 acres, were purchased.

South Mountain Park: Located along the ridge traversed by the Long Trail, this 239-acre mountainous area is part of the Palisades escarpment which ends at Route 45. There are a number of scenic views overlooking Haverstraw and the Hudson River, Mt. Ivy and Thiells, Clarkstown and Orangetown. The land is covered with a forest of hardwood trees. In season there are blueberries, wild grapes and raspberries. 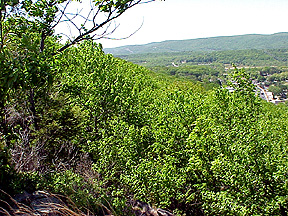 History:  The mountain is noted more for South Mountain Road that runs along its base and the people who resided along this road including Maxwell Anderson, the famous playwright, who made the eastern end of the mountain famous in his play,” High Tor.”  An air beacon formerly marked this high point but was constantly vandalized before it was finally removed. Prior to its purchase, the crest of the mountain was approved for the construction of apartment houses. With the aid of federal funds and gifts of adjoining land, the original section was purchased in 1975-76. A large tract to the west in the Town of Ramapo was obtained by tax delinquency extending the park from Central Highway to Route 45.