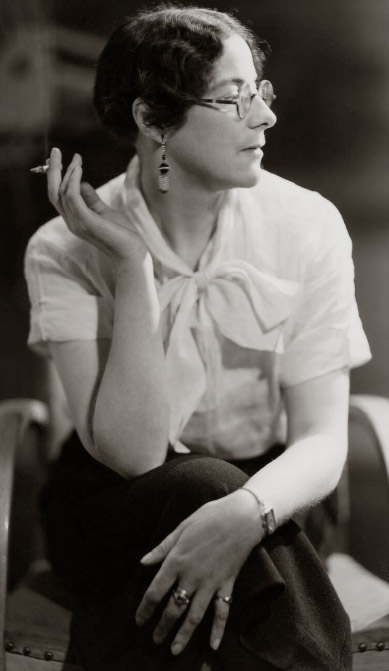 Information about the author is available at the Sylvia Townsend Warner Society website.

Works by and about Sylvia Townsend Warner

A virtual reading, by Sylvia Townsend Warner, of her poem "Go the Long Way, the Long Way Home"

(From the Poetry Archive)

Sylvia Townsend Warner [1893-1978] is best known today as a groundbreaking feminist and lesbian writer who championed the cause of the outsider in novels such as Lolly Willowes. However, this is only one aspect of a writer whose literary career also encompassed poetry, short stories, essays, biography and translation. The publication by Carcanet in 2008 of a Collected Poems has prompted an overdue reassessment of Townsend Warner as a poet of great imaginative scope and variety.

Townsend Warner was born in Harrow-on-the-Hill where her father was a housemaster at Harrow School. They shared a close relationship and his early death brought her happy childhood to an end. By contrast, her relationship with her mother was always strained.

Her first love was music – only the outbreak of the First World War prevented her from studying composition with Schoenberg. Instead she moved to London and embarked on a decade-long task of scholarship, editing the 10 volume Tudor Church Music. She made friends among the 'Bright Young Things' of the 1920s one of whom, David Garrett, was instrumental in getting her first book published by Chatto and Windus, a poetry collection called The Espalier [1925].

However, it was the publication of Lolly Willowes the following year that brought her recognition on both sides of the Atlantic. 1926 was also a turning point for Townsend Warner personally when she met and fell in love with a young poet, Valentine Ackland. The couple lived together until Ackland's death in 1969. Their first home was in Chaldon Herring in Dorset where they were able to live in comparative freedom. For the rest of their lives the couple tended to seek out rural seclusion, in Norfolk and finally Dorset again. The English countryside, its beauty and hardships, is an important shaping force in Townsend Warner's work.

This relative isolation did not stop them from being actively engaged in issues of their time. Alarmed by the rise of Facism, Ackland and Townsend Warner both became active members of the Communist party and made several trips to Spain during the Spanish Civil War. Their lives at this time, and much of their writing, were charged with politics, such a Townsend Warner's 1938 novel After the Death of Don Juan.

In all, Townsend Warner published seven novels, four volumes of poetry and a huge number of short stories, 144 of which were published in The New Yorker. She wrote right up to her death, her last book of stories, Kingdoms of Elfin, appearing in 1977. Townsend Warner died on May Day 1978 and her ashes were interred, along with Valentine Ackland's, under a single stone in Chaldon churchyard.

Perhaps the most striking characteristic of Townsend Warner's writing is its sheer variety, not just in terms of genre, but also subject matter and approach. Her novels range widely across time and place, from revolutionary Paris [Summer Will Show], the South Sea Islands [Mr Fortune's Maggot], to a 14th century priory in East Anglia [The Corner that Held Them] while her poetry encompasses ballads, epitaphs, narrative, love poems and burlesque.

However certain themes thread through these contrasting works: what one critic has described as a "sardonic rural and suburban pastoralism" gives much of her writing a witty, subversive edge. Alongside an appreciation of the absurdist aspects of human behaviour is an empathy with the outsider - the misfits struggling to protect their individuality within an oppressive society.

Her poetry is also distinctive for its formal complexity, perhaps not surprising given her early immersion in music. Sometimes this musicality is combined with a tough realist edge, as in her hard-hitting poems about her experiences in Spain and the Second World War. Elsewhere, particularly in her love poems to Ackland, she captures an emotional intensity in which "the kindling of language and flesh seem one" [John Wilkinson, University of Notre Dame, Project Muse].

Another powerful theme is the onset of age, exemplified in her Archive recording, 'Gloriana Dying'. A dramatic monologue in flexible blank verse, it movingly imagines the aging Elizabeth I as she faces her impending death. Read by the elderly poet, it's deeply touching in its combination of physical vulnerability and toughness of spirit and mind. The poem ends with a remarkable acknowledgement that the great Gloriana now has more in common with the least of her subjects - the prisoner, the shepherd and the humble "long-dreaming country lad".

Townsend Warner once commented wryly "I intend to be a posthumous poet". The revival of interest in her poetry has encouraged a fresh appreciation of this aspect of a writer described by one critic as "second only to Virginia Woolf among the women writers of our century."