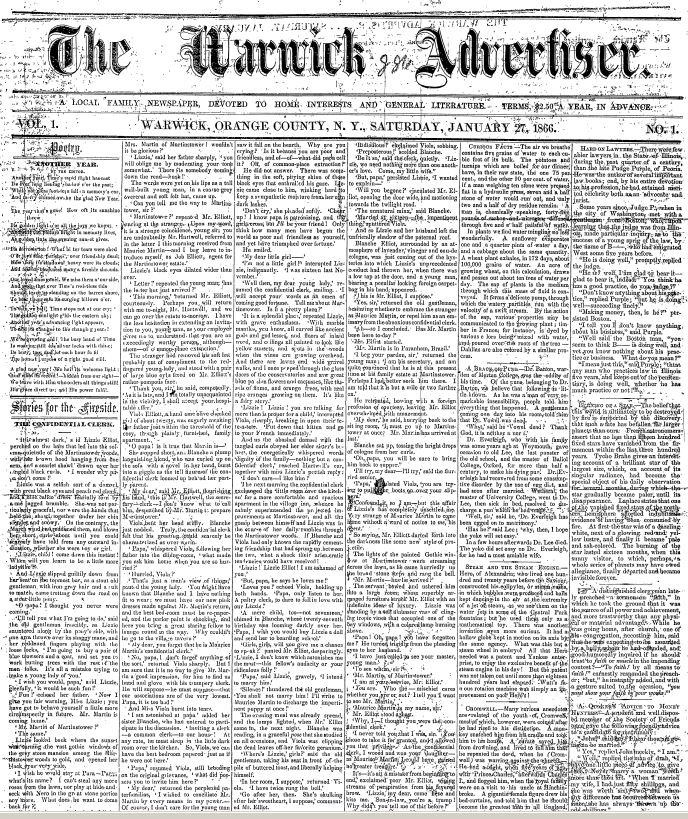 You can find some local events in other newspapers--  but regular Google search will not consistently find things in their scanned newspaper collection.

To do that, in the regular Google search bar, type:

and after that type in your search terms.   It will only retrieve scanned newspapers.  Once you have done one search, at the top of the screen you'll see a second "search bar" that will then automatically just search the newspapers for you:

Local Newspapers on the Web

There are several newspapers whose coverage included the Town of Warwick.

MOST OF THE WARWICK WEEKLY PAPERS AND SOME EARLIER GOSHEN PAPERSARE NOW AVAILABLE FREE ONLINE!

The two major weekly papers that covered news primarily of the Warwick Valley area (west of Mt. Peter) are The Warwick Advertiser (est. 1866) and the Warwick Valley Dispatch (est. 1885).  Prior to 1866, local news was published in the newspapers of Goshen, NY, and Middletown, NY.  Both the Advertiser and the Dispatch are preserved in microfilm form at the local history room of Albert Wisner Public Library, and these films are gradually being digitized.

The Warwick Historical Society Archive has a number of local newspapers in hardcopy, including some titles not microfilmed.  Check their title list.

Microfilm of the Warwick Advertiser and the Warwick Valley Dispatch, covering nearly all known issues, is available for viewing at the Albert Wisner Public Library in the Wisner Room.  Interlibrary loan of microfilm is available through the New York State Library.

Hardcopy of some years for both the Warwick Valley Dispatch and the Warwick Advertiser is owned by the Historical Society of the Town of Warwick.

Before local newspapers existed, there are some very early articles that appeared in regional newspapers.  Selected articles from the Goshen and New York papers are available on our Really Old News page.