The "Pulpit Rock" formation near the corner of West Street and County Rt. 1 has been a noted landmark of the town for generations of Warwick residents.  This page presents historical documents about  this geological formation as they have appeared in local newspapers, writings, and photographs.

The rock outcropping is located near the corner of West. St. and County Rt. 1.

What IS Pulpit Rock? Geology

Locals have wondered for probably as long as humans have been here,  how Pulpit Rock came to be.

In 1881 Warwick Institute graduate J. Burt Martine postulated in the Warwick Advertiser of July 14, in a paper titled "Our Glacial Epoch""

"Near the Village of Warwick ... upon the farm of Mr. s. Pelton, is a block of grey limestone of large size called 'Pulpit Rcck' that has been carried from the north side of the road to the south side." (by the glaciers).

In 1997 a controversy erupted in the community over the library's plan to build a new facility there.  Library Director Margery Cyr received so much concern over putting a building on the parcel that she responded.  The plan was not approved. 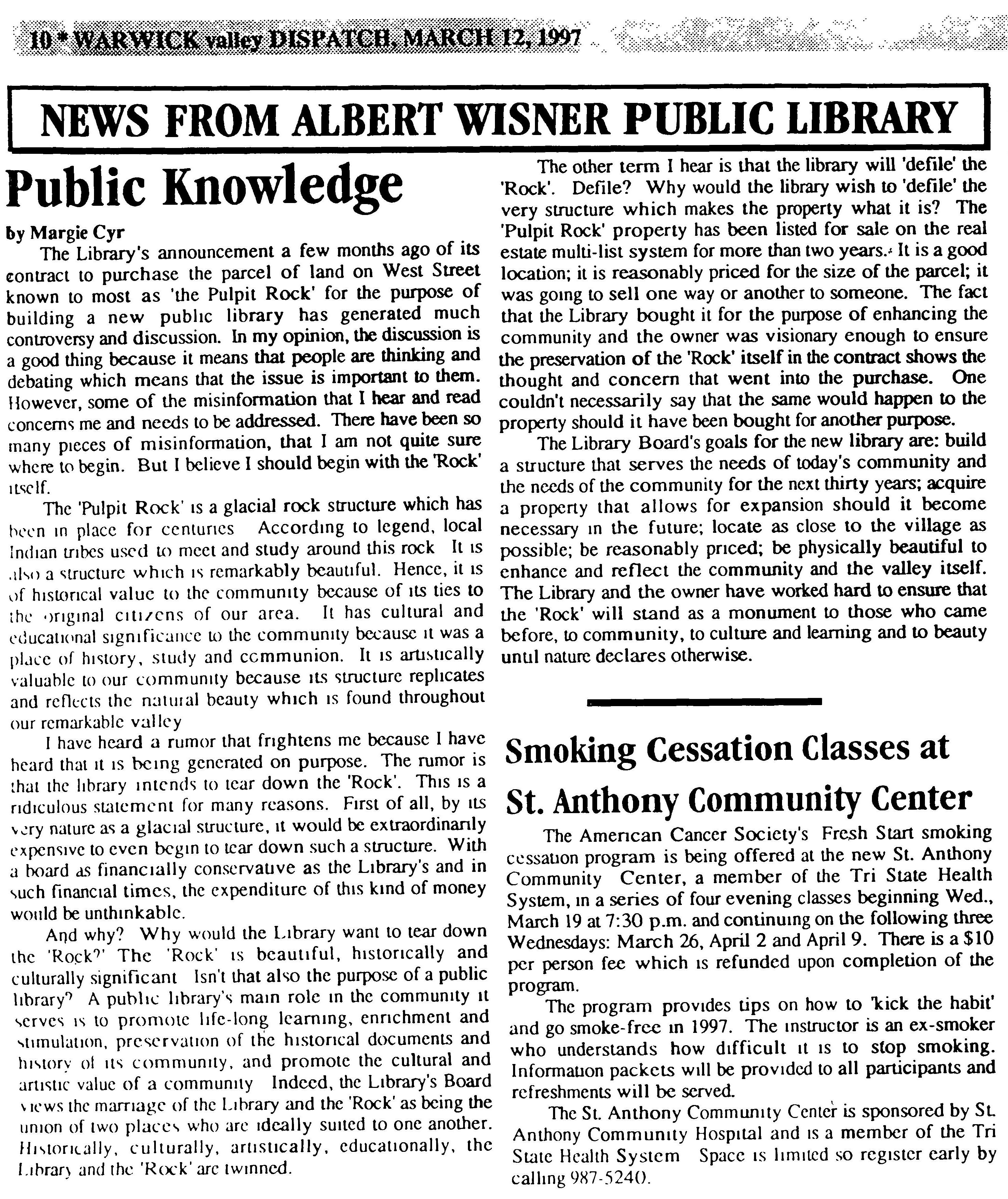 Historical photographs of the formation.

Early Days in Warwick: Some Chapters in Local History By W. B. Sayer. Originally published in the Warwick Advertiser March 31-May 12, 1898

"The sketch below is copied from Henry Pelton’s history of Warwick as given by him when he first moved here, in 1805, when he was fourteen years old, and has been revised to date..."

"Next was Cornelius Demarest, the grandfather of David D. and Cornelius H. Demarest, where Samuel Pelton now lives.  On this farm, on the south side of the road, is a large high rock standing out in a smooth field known as “Pulpit Rock.”  The Indians used to hide behind this rock and shoot deer as they came from the hills to the creek to drink."

Transcriber's note:  The memories of Henry Pelton were published earlier as a privately printed pamphlet.  A map of the locations he mentions knowing in his childhood after arrival in 1805 was published by the Warwick Historical Society.

Additional detail by a later writer: "... In the days when the Erie canal was in its glory, some relatives journeyed to Elmira to see other relatives. While there, an Indian from the reservation, hearing the visitors were from Warwick, came to visit with them. He told them that as a boy he had been in Warwick and had lain flat on his stomach on the top of Pulpit Rock to shoot deer. It is rather difficult to imagine deer running by Pulpit Rock these days as one looks at its picturesque beauty from the old Henry Pelton homestead. [Source: Undated typescript, unknown author. Marked as page 3, no other pages found, part of the Florence Tate Collection of the Warwick Historical Society. Appears to have been written when Rt. 94 above Warwick Village had just been rerouted off the old "jog" near Ackerman Rd.