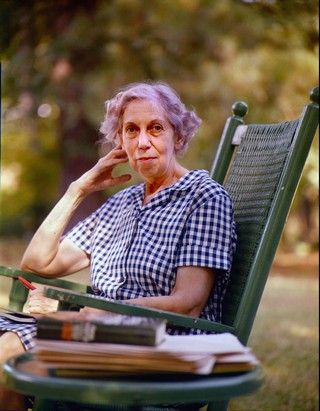 Information about the author and her work is available at https://en.wikipedia.org/wiki/Eudora_Welty

Get personal with Eudora Welty

During the Great Depression Eudora Welty was a photographer on the Works Progress Administration’s Guide to Mississippi, and photography remained a lifelong interest. She also worked as a writer for a radio station and newspaper in her native Jackson, Mississippi, before her fiction won popular and critical acclaim.

Other works by Eudora Welty

The Optimist's Daughter won the Pulitzer Prize in 1973. Eudora Welty received numerous awards, including the Presidential Medal of Freedom and the Order of the South.

1. The novel begins with Judge McKelva, Fay, and Laurel in an examining room, with Dr. Courtland determining what is wrong with Judge McKelva’s eye. Explain how this exchange sets up the characterization for all three main characters.

2. How does the confined setting of the hospital room during Judge McKelva’s recovery continue developing the plot and the characters?

3. How does the exchange between Dr. Courtland, Fay, and Laurel after the judge’s death reveal the social status of the characters?

5. Who is Missouri? How does her presence add another layer to the social differences in the novel? What are the roles of other African-American characters?

6. Two surprising things happen during the course of Judge McKelva’s visitation. One, Fay’s family appears after she has told Laurel that they are dead; two, Laurel becomes upset about the recollections people are making about her father. How are these things related?

7. What does Fay’s family add to the novel? Describe their relationships compared to the ones Laurel shared with her parents.

8. After Fay is gone, Laurel spends the night in her mother’s room. What is Laurel doing? What is she experiencing?

9. That night, when Laurel falls asleep in the chair, she dreams of riding the train with Phil to Mt. Salus. What is the image that she dreams about? What does it mean?

10. A pivotal scene in the novel is the freeing of the chimney swift, the bird that was trapped in the house. What might this represent?

11. What happens in the final confrontation between Laurel and Fay over Becky’s breadboard? What realization, or epiphany, does Laurel have?

12. In the introduction to the Franklin Library edition, Welty writes that in The Optimist’s Daughter she wanted to focus on “the progression of human relationships. Their tensions act as the directing force; and the plot of the novel tests the movement and pull, with and against, the power and strength of kinship.” By the end of the novel, how many ways has she demonstrated this? Do you find this to be a compelling subject for a novel?

13. Another theme in the novel is the process of grief and how people react to loss in different ways. What are the different characters’ reactions? What do you find most true to your own experience?