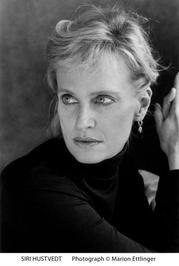 Other Works by Siri Hustvedt

(Questions via the publisher.)

1. Discuss Harry’s partnerships with Anton Tish, Phineas Q. Eldridge, and Rune in relation to the artwork she created for each of them. How did each partnership differ from the other two? Why did Harry choose these three men?

2. How did the novel’s multi-voiced, fragmentary style affect your reading experience? In the introduction, I.V. Hess writes, “All of Burden’s notebooks may be read as forms of dialogue” (p. 6). Did this comment help you navigate the novel’s structure? What role does dialogue play in the novel as a whole?

3. Harry tells stories of other artists who used pseudonyms or false identities to present their work to the world. Alice Sheldon had two personas: James Tiptree and Racoona Sheldon (pp. 186–188). Why did Ursula Le Guin prefer the works of one pen name over the other? What does Harry mean when she tells Maisie that by assuming a male identity, “You get to be the father”(p. 187)? Find and discuss other stories of pseudonyms and cross-dressing that appear in the novel.

4. A different person describes each of the three works in Maskings (The History of Western Art, Suffocation Rooms, and Beneath). Return to these passages and discuss how the observer’s personality, relation to Harry, and biases influence his or her interpretation of the artwork. What was Harry trying to convey in each work? How does she make each persona fit inside her own art?

5. Harry struggles with questions of gender inequality throughout the book. She is convinced her sex has hampered her, but others disagree. In Maskings she hopes to prove that when her work is shown with a male pseudonym attached, she will finally achieve the success she deserves. Bruno Kleinfeld, Harry’s lover and partner at the end of her life, also fails to achieve the success for which he had hoped. What would Harry have thought of Bruno’s opinion that “it was worse for a man, worse for a man to fail, to lose the strut in his walk” (p. 158). How does Bruno’s view of manhood complicate Harry’s view of womanhood?

6. Harry asserts that she is not interested in living as a man physically, that she is interested in “perceptions and their mutability, the fact that we mostly see what we expect to see” (p. 33). Discuss the recurring theme of perception in the novel and its relation to character. For example, how does Oswald Case read Harry’s art? Compare his view to that of other characters in the novel.

7. Ethan’s chapter “An Alphabet Toward Several Meanings of Art and Generation” (pp. 135–136) is a highly abstract, compact version of Harry’s Maskings experiment that parodies the language of analytical philosophy. Analyze the text and discuss what it means in relation to the book as a whole.

8. Hess includes statements from reviewers who praised Harry’s work long before she embarked on her pseudonymous experiment. Rosemary Lerner calls Burden on the phone after viewing The History of Western Art because she recognizes its similarity to Burden’s earlier work. Lerner’s inclusion in the novel proves that there were people in the art world who took notice of Burden. Discuss why this recognition is not enough for the artist.

9. As the story unfolds, we learn more details about Harry’s marriage to Felix Lord. The complexities of her relation to Felix reveal that despite her desire for independence and power, Harry admits that she was often submissive in her marriage. In her journals, she writes, “I am Odysseus, but I have been Penelope” (p. 327). What does she mean by this and how is her double position as both hero and waiting wife connected to her relationship to Felix, her father, and Rune?

10. Harry includes memories of her childhood and her parents in her journals. Consider the passage in which Harry tells about her unannounced arrival at her father’s office (p. 142–143). Why does this small event stay with Harry for so many years? Find other passages that treat Harry’s relationships with her parents and discuss how her early family life shaped her personality.

11. Discuss how dreams figure in the novel. Harriet, Ethan, and Rachel all recount dreams and provide interpretations of them. Analyze one of these dreams. Is your own understanding of the dream different from the character’s?

12. We hear three different versions of the kitten story from Rune’s childhood: first from Oswald Case (p. 181), then from Harry (p. 213), and finally from Rune’s sister (p. 311). What do you make of these varying accounts? Why does Rune alter his past? Which story do you believe? What does the story in its shifting versions tell you about Rune as a person?

13. Reread and discuss Richard Brickman’s letter to the editor (p. 251–255), which reveals Harriet Burden as the person behind the three works in Maskings. Hess refers to the letter and the project of Maskings as “a philosophical comedy” and further argues that the letter is Burden’s “ironic treatment of her own position” (258). Is Hess right? Was this the best way for Harry to reveal herself to the world? Why or why not?

14. Discuss the role of footnotes in the novel. Why did Hustvedt include notes? How did they affect your reading experience?

15. We only hear Hess’s voice a few times during the course of the novel—in the introduction and in his interviews with Cynthia Clark, William Burridge, and Kirsten Larsen Smith. In the interview with Burridge, Hess begins to dominate the conversation. Is Hess an unbiased observer of the Maskings story? How does the editor influence the reader’s experience of the novel?

16. Sweet Autumn Pinkney is a minor character in the novel. Unlike many of the other people in the story, she is possessed by new age ideas and is not highly educated. Why does Sweet Autumn have the last word? Is there something she seems to understand about Harry and Harry’s work that the others don’t?