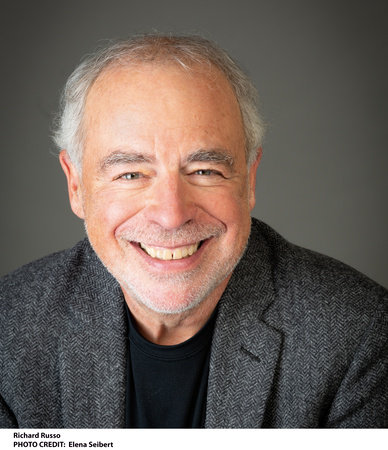 Information about the author is available on his facebook page.

1. This novel's title, Nobody's Fool, is a punning reference to its protagonist, Donald Sullivan, who at age 60 is "divorced from his own wife, carrying on halfheartedly with another man's, estranged from his son, devoid of self-knowledge, badly crippled and virtually unemployable--all of which he stubbornly confuse[s] with independence." Why is Sully so insistent on remaining nobody's fool? How has this determination affected his relationships with other people?

2. One consequence of Sully's prickly autonomy is his tendency to go off on "stupid streaks." Is Sully a stupid man? How would you evaluate a freedom whose defining characteristic seems to be the freedom to do the wrong thing at the wrong time?

3. From the beginning we know that Sully has a bad knee, and his refusal to treat--or even favor--it generates many of the novel's complications. In what ways does this injury resonate with the novel's themes?

4. Sully's string of misfortunes may also be due to bad luck or malign predestination. Is he destined to be unlucky? To what extent are his actions and character predetermined?

5. Sully's father brutalized him as a child. Sully deserted his son, Peter. Peter abandoned his timid eldest son, Will, to the mercies of his sociopathic little brother. What causes does the author posit for this four-generation history of cruelty and neglect?

6. Perhaps to compensate for Sully's brutal father, Russo supplies Sully with a very good, if somewhat sharp-tongued, surrogate mother, Beryl Peoples. She may, in fact, be the most real and enduring attachment Sully has. How does their relationship compare with Beryl's relationship with her real son, Clive, Jr.? How is the antagonism between Clive and Sully an extension of their childhood rivalry for the affections of Beryl's late husband?

7. How would you characterize Russo's portrayal of relations between the sexes, and why are most of his characters divorced, widowed, or unhappily married?

8. The sudden flashes of good luck (or simple happiness) that illuminate Sully's life and the lives of other characters may be attributable to grace, which The Random House Dictionary of the English Language defines as "the influence or spirit of God operating in humans to regenerate or strengthen them." At what moments does grace seem to operate in this novel?

9. Nobody's Fool is also a novel about a town, North Bath, New York, whose misfortunes, like Sully's, may be due to collective stupidity or fate. Even North Bath's venerable elms now constitute a threat to its communal life and property. In what ways do the novel's principal locales--Hattie's, the OTB, and the White Horse--function as a microcosm of the town as a whole? To what extent are North Bath's decline and grandiose visions of renewal symptomatic of the political and economic climate of America in the 1980s?

10. What role does class play in this novel? To what extent are its characters shaped by economic circumstances?

11. One critic has described Nobody's Fool as "a sad novel camouflaged in comedy." How is this true? What is the nature of the book's sadness? How does Russo balance his comic and tragic impulses?