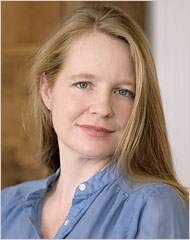 1. Talk about the Love of Christ! Foster Home, Farm, and Mission and the "Father" who runs it. Did those kind of places exist in the 19th century? It might be interesting to do a bit of research into the treatment of orphans prior to the mid- to late-20th century in order to ascertain the degree to which the Love of Chirst! represented the norm (Obviously, Samantha's representation is a parody, but even parodies are based on some semblance of reality.)

2. How would you describe Nat and Ruth's relationship? What does it mean that they call themselves sisters?

3. Ruth says that every story is a ghost story. What does she mean? Samantha Hunt has said elsewhere that "To think about 'haunted' is not necessarily a bad thing: to think about our dead in a different way. To use them in some way." How is her thinking reflected in Mr. Splitfoot? m. What's in a name, especially the name of Mr. Splitfoot? What does the name conjure up in the imagination? For Ruth, "Mr. Splitfoot is a two that is sometimes a one, mothers and their children, Nat and Ruth, life and death." What does she mean?

4.  What do you think about Mr. Bell? Think, too, about his name: the notion of the clarity of a ringing bell. He's a con man, a survivor. How else would you describe him?

5. Cora describes herself as shallow, willing to accept easy answers. How does her journey change her?

6. This is also a book about motherhood. Cora says that people are continually telling her the difficult parts of being a mother, but she's beginning to realize that a mother has to be brave, even fierce. How does this book explore motherhood? What kind of mothers are in this book: good, bad, dead, even nuns. In what ways is the absence of maternal love and guidance felt by the characters? What kind of mother do you think will Cora be?

7. What about the "ghost activist," Sheresa, who always looks out for dead people. What role does she play in the book?

8. Talk about the humor in this book, indeed, some of it is downright silly: for instance, there's the Society for Confusing Literature and the Real Lies" and the mash-up at the event on the Erie Canal with Captain Ahab, Huck Finn, Lord Nelson and a German U-boat. What else do you find funny?

9. At times the events in the book seem completely random and unrelated. How do they eventually come together to form a whole fabric of significance?

11. Do a little research about Lily Dale in New York State, and the manner in which it's past and present-day spiritualism informs this novel.