Book Discussion Guide: American Rose: A Nation Laid Bare: The Life and Times of Gypsy Rose Lee by Karen Abbott: About the author 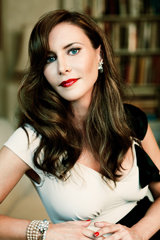 Karen Abbott is the author of Sin in the Second City and American Rose, both New York Times bestsellers. She is a featured contributor to Smithsonian magazine’s history blog, Past Imperfect, and also writes for Disunion, the New York Times series about the Civil War. A native of Philadelphia, where she worked as a journalist, she now lives in New York City with her husband and two African Grey parrots, Poe and Dexter. She’s at work on her next book, a true story of four daring (and not entirely scrupulous) Civil War spies who risked everything for their cause.