The author's biography is available at the author's website and Contemporary Authors Online.

Other Books by Colum McCann

1. Let the Great World Spin is told through the eyes of eleven different characters. What is the effect of this chorus of voices? Why do you think the author chose to tell the story this way? If you had to choose a single character to narrate the whole book, who would it be, and why? What do you think might be lost, or gained, by narrowing the story to a single perspective?

2. As McCann explains in the author’s note, the book’s title comes from “Locksley Hall,” an 1835 poem by Alfred, Lord Tennyson, which was itself inspired by a series of ancient Arabic poems. Why do you think McCann chose to use this title for such a modern American story? What does the title mean to you, and do you think it affects your relationship to the book as a reader? Would this be a different novel, do you think, if it had been called something else, like “Highwire”?

3. The narrative takes place almost exclusively in New York City, but could it have taken place in any other city in the world? How can this be seen as a specifically “New York” novel, and how might it not be? Are there ways in which the characters are emblematic of their time and place, or is there an “everyman” quality to them?

4. The novel opens with an extraordinary tightrope walk between the World Trade Center towers. This is a fictionalization of a famous stunt by Philippe Petit in August 1974–yet the tightrope walker in the novel remains anonymous, unrelated to any of the other characters. What do you think the effect is of weaving this historical fact into the fiction of the other characters’ stories? What do you think McCann intends toachieve with this, and in what ways do you think he succeeds?

5. How important do you think this historic walk is in the novel itself? In what ways would the stories–and story–McCann is telling be different if the novel had been set on a different day, or in a different era?

6. Do you see ways in which the tightrope might function as a metaphor, or symbol, throughout the book?

7. In the chapter titled “This Is the House That Horse Built” we get an intimate glimpse into the life of a New York prostitute in the 1970s. She considers herself a failure. Do you agree with her? Or do you think she achieves grace despite the circumstances of her life?

8. All but one of the chapters in Let the Great World Spin are set over the course of a couple of days in early August 1974. Why do you think McCann chose to jump thirty-two years, to 2006, for the final chapter? In what ways do these pages add to, complicate, or even change the story that came before? Why do you think he chose the character of Jaslyn to tell that final piece of the story?

9. What do you think Jaslyn discovers at the end of the novel?

10. What parallels do you see between the society of the 1970s, as McCann depicts it in the novel, and today? How do you believe these similarities and differences speak to the changes in America and the world over the past several decades? Would it be fair to say that America itself is one of the evolving characters in the novel, a separate figure whose story is also being told?

11. Adelita says: “The thing about love is that we come alive in bodies not our own.” What does she mean by this?

12. It can be argued that Corrigan and Jazzlyn are the book’s two main characters, yet they die in the opening chapters. Why do you think McCann chose to allow their lives to be destroyed so early in the book? Why did he choose not to tell any of the story through their points of view? In what ways do you think that decision makes these two people more–or less–central and powerful in the story as a whole? Could it be said that it is sometimes the stories not told that affect us the most? 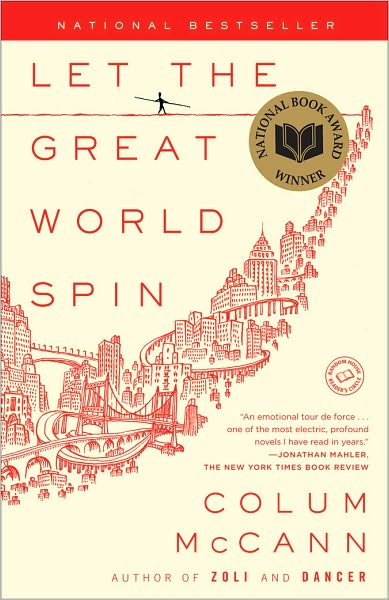 If you liked Let the Great World Spin, you might enjoy the following books.