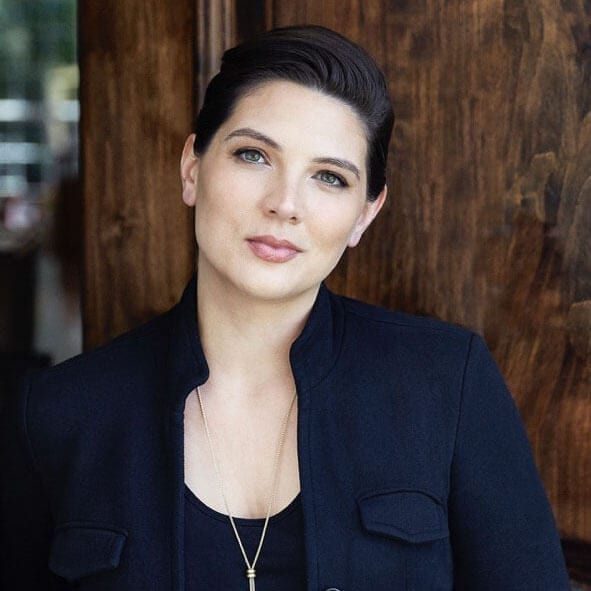 Information about the author and her work is available at https://taylorjenkinsreid.com/

Get personal with Taylor Jenkins Reid

Taylor Jenkins Reid grew up in Acton, Massachusetts. She is married to Alex Jenkins Reid, and they live in Los Angeles with their daughter.

Other Books by Taylor Jenkins Reid

The Seven Husbands of Evelyn Hugo: A Q & A with Taylor Jenkins Reid

Taylor Jenkins Reid’s latest novel, The Seven Husbands of Evelyn Hugo, explores the steep price tag that comes from fame. Fame costs Evelyn Hugo in essentially every area of her life, but at the end of the list, she decides to set the record straight. Hugo’s life story will keep reader’s enthralled at each turn.

The strength of your novel is the insider’s view of Hollywood. What did you do to cultivate the background knowledge?

As of 2019, Freeform TV has put into development The Seven Husbands of Evelyn Hugo with the author attached to pen the series adaptation, and Ilene Chaiken and Jennifer Beals executive producing.

1. Each husband’s section opens with an illustrative moniker (for example, "Poor Ernie Diaz," "Goddamn Don Adler," "Agreeable Robert Jamison"). Discuss the meaning and significance of some of these descriptions. How do they set the tone for the section that follows? Did you read these characterizations as coming from Evelyn, Monique, an omniscient narrator, or someone else?

2. Of the seven husbands, who was your favorite, and why? Who surprised you the most?

3. Monique notes that hearing Evelyn Hugo’s life story has inspired her to carry herself differently than she would have before. In what ways does Monique grow over the course of the novel? Discuss whether Evelyn also changes by the end of her time with Monique, and if so, what spurs this evolution.

5. Did you trust Evelyn to be a reliable narrator as you were reading? Why, or why not? Did your opinion on this change at all by the conclusion, and if so, why?

6. What role do the news, tabloid, and blog articles interspersed throughout the book serve in the narrative? What, if anything, do we learn about Evelyn’s relationship to the outside world from them?

7. At several points in the novel, such as pages 82–83 and 175–82, Evelyn tells her story through the second person, "you." How does this kind of narration affect the reading experience? Why do you think she chooses these memories to recount in this way?

8. How do you think Evelyn’s understanding and awareness of sexuality were shaped by her relationship with Billy—the boy who works at the five-and-dime store? How does her sensibility evolve from this initial encounter? As she grows older, to what extent is Evelyn’s attitude toward sex is influenced by those around her?

9. On page 54, Evelyn uses the saying "all’s well that ends well" as part of her explanation for not regretting her actions. Do you think Evelyn truly believes this? Using examples from later in her life, discuss why or why not. How do you think this idea relates to the similar but more negatively associated phrase "the ends justify the means"?

10. Evelyn offers some firm words of wisdom throughout her recounting of her life, such as "Be wary of men with something to prove" (p. 77), "Never let anyone make you feel ordinary" (p. 208), and "It is OK to grovel for something you really want" (p.192). What is your favorite piece of advice from Evelyn? Were there any assertions you strongly disagreed with?

11. Several times, Evelyn mentions having cosmetic surgery. What was your reaction to this? How do these decisions jibe with the value system and ethical code that she seems to live by? Why do you think Evelyn continues to dye her hair at the end of her life?

12. Review the scenes on pages 199 and 348, in which Evelyn relays memories of conversing in Spanish after years without speaking it. Discuss the role language plays in her understanding of who she is. In what ways does her relationship to her Cuban identity parallel her experiences with her sexuality, and in what ways does it differ?

13. If you could meet and interview one celebrity at the end of their life, who would it be? What would you ask them?
(Questions issued by the publisher.)