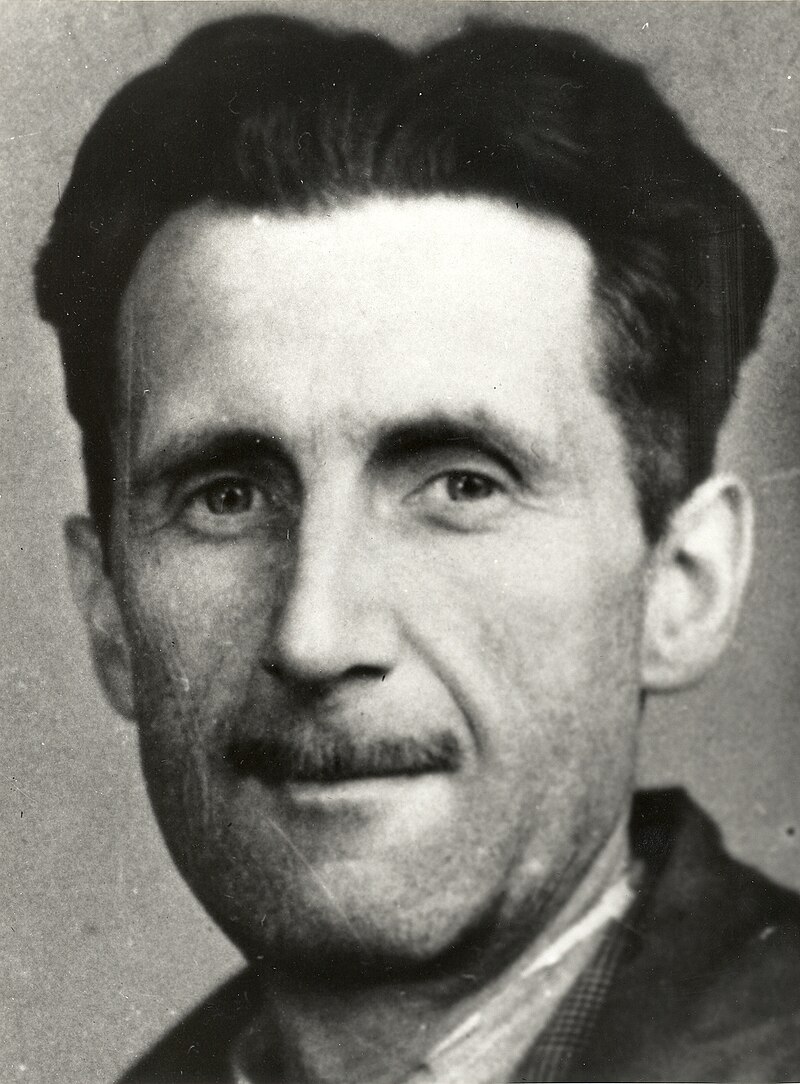 Information about the author here.

2. In the afterword, the commentator describes 1984 as "a warning." Indeed, throughout the text, Orwell plants both subtle and overt warnings to the reader. What do you think are some of the larger issues at hand here?

3. Describe the role that O'Brien plays in Winston's life. Why do you think that initially, Winston is drawn to O'Brien? Why does he implicitly trust him, despite the enormous dangers involved?

4. Discuss the significance and nature of Winston's dreams. Deconstruct the dream wherein O'Brien claims that they "shall meet in a place where there is no darkness" (page 22), and the dream in which Winston's mother and sister disappear (page 26). What are the underpinnings of these dreams? What deeper meanings do they hold? Why do you think the author devotes as much time as he does to Winston's dreams?

5. Discuss Winston as a heroic figure. What qualities does he posses that could define him as one?

6. Compare and contrast some of the other characters in Winston's world: Parsons, Syme, O'Brien. How does Winston view each one? How do they differ from Winston? What opinion do you think each one has of Winston?

7. On pages 147-148, Winston reflects on the omnipresence of The Party: "He thought of the telescreen with its never-sleeping ear. They could spy upon you night and day, but if you kept your head you could still outwit them….Facts at any rate, could not be kept hidden. They could be tracked down by inquiry, they could be squeezed out of you by torture. But if the object was not to stay alive, but to stay human, what difference did it ultimately make?" What, in essence, is Winston saying about the lone individual in relation to The State? Does this contention remain true throughout the novel?

8. Early on in the novel, we learn of Winston's belief in the proles as a liberating force. What accounts for Winston's almost blind faith in the proles? What are some of the characteristics of the proles that, in Winston's eyes, make them the ultimate means for overthrowing Big Brother?

9. From her first appearance as "the dark-haired girl," through to the end of the novel, Julia is a key figure in 1984. Trace the path of Julia in relation to Winston's life; in what ways does she influence him? Did you trust her, initially? Overall, do you feel she had a positive or negative impact upon him?

10. After his first formal meeting with O'Brien, Winston receives a book, ostensibly written by Emmanuel Goldberg. In reading passages from this book, Winston is further enlightened as to "how" the current society came into being. Focus on these passages, and in particular, on the theory of the High, Middle and Low classes (page 179). If true, what does this theory hold for the proles? Is Winston's plan for the proles now altered? Why or why not?

11. During Winston's interrogation, O'Brien explains that whereas preceding totalitarian regimes had failed, The Party was truly successful in its consolidation of power (page 226). How, according to O'Brien, does the The Party as an oligarchy differ from Nazism or Russian Communism? How does he define the role of the martyr, both in terms of The Party and the other totalitarian systems?

12. Following his capture in Mr. Charrington's spare room, Winston undergoes a process of "philosophical cleansing" and re-education against which he valiantly, but unsuccessfully fights. Discuss Winston's "capitulation" at the hands of O'Brien. How is Winston brought to "love Big Brother?" In sacrificing Julia, how has Winston, in essence, signaled his own end?

13. How would you describe the author's tone in 1984? Does it add to or detract from the character's discourse?

14. Discuss the role of sex and intimacy in 1984. What specific function does the Party's directive on sexual interaction serve?

15. In the final analysis, how accurate was Orwell in his vision of the future? In what ways does our contemporary society compare to his idea of society in 1984? Are there examples in which he was correct? What is most opposite? Do you see a potential for aspects of Orwell's "vision" to come true?

16. During his final encounter with O'Brien, Winston argues that, if all else fails, the inherent nature of the individual—the "spirit of man"—is strong enough to undermine a society such as that created by The Party. Do you agree or disagree with this statement? Is Winston's belief applicable to the world we live in today? Can you cite examples in our own recent history that support or dismiss Winston's belief in the resiliency and righteousness of the human spirit?

17. Prior to meeting her, Winston fantasizes about Julia in violent, humiliating ways. Later, he describes in his diary an encounter with a middle-aged, toothless prostitute. How do you account for these thoughts? How does Winston's understanding of women change after his first liaison with Julia?

18. Given Winston's own acknowledgment that he is under constant surveillance, and that it would only be a matter of time before the Thought Police caught him, no one in his world could be trusted. Prior to his capture, which character or characters did you envision as betraying Winston? How did you foresee his ultimate demise? Did you, on the contrary, feel that by some chance he would overcome the forces aligned against him, and fulfill his wish to conquer The Party?

19. Imagine yourself as Winston Smith at the beginning of 1984. What would you do to undermine The Party? Knowing what you know now, how would you extricate yourself from the fate that awaits you?

20. Refer back to Winston's conversation with the old man at the pub (page 78). Why is Winston so determined in his approach to the old man? What is Winston hoping to learn from him?
(Questions from Penguin Modern Classics.)